A Side of Sunsets Travel...with a side of sunsets
Home Places Asia Finding Relaxation in a Chaotic Vietnam 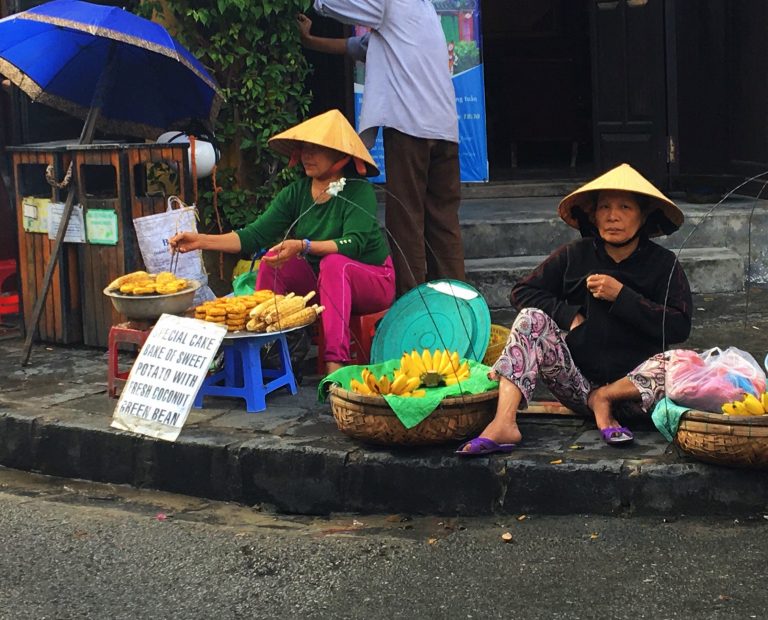 Before we went on our trip to Vietnam I did a lot, I mean A LOT of research on the best way to spend one or two weeks in the country – where to go, what not to miss.  After all was said and done, here is where we ended up:

We arrived in Saigon late night. If you do Visa on Arrival be prepared that it could take a little while to actually get your Visa.

After a lot of travel and a crazy night, we spent our first full day in Saigon at the pool and with massages before going on a motorbike food tour at night (DO IT! I promise it’ll be one of your favorite things you do on your trip!)

Checked out the War Remnants Museum.  We were also lucky enough to have a friend of a friend who was an ex-pat living in Saigon and he spent the afternoon showing us around other parts of Saigon. Of course we just scratched the surface – there are so many things to do and delicious places to eat in Saigon!

Fly to Da Nang, taxi to Hoi An.  Hoi An was another favorite part of the trip for me. It’s a quaint little town and if you want to get any custom clothes made, well this is where you do it.  We spent the afternoon wandering the streets, in and out of tailors until we found Yaly Couture which had been recommended to us.

We hired a car and visited the My Son ruins in the morning. Imagine a mini-Angkor Wat meeting Indiana Jones.  For a half day trip I’d say it was worth it.  We then spent the remainder of the day in and out of Yaly, Toby getting custom suits and shirts while I was fitted for dresses, rompers and shoes.

We headed back to Yaly one last time that morning. We had been there enough we were given complimentary (morning) mojitos while we waited.  Then we were off to Da Nang for New Years Eve.  Da Nang is a bit bigger of a city on the beach but the weather in December on the central coast of Vietnam isn’t necessarily beach weather.  I don’t think it’s a necessary stop but I thought a big city would provide more options for New Years Eve.

We checked out the Mother Buddha in the morning – a short drive from downtown Da Nang and then our hired drive came to drive us to Hue.  I chose this option instead of flying because of the Hai Van Pass.  It was beautiful.  However, the roads get pretty windy so if you get carsick at all, or decide to make the drive on New Years Day, you may want to rethink your decision.  Luckily, I survived.  We spent the rest of the day exploring the Imperial Palace in Hue.  It was cool to see but if I had to do things again I would have probably gone straight from Hoi An to Hanoi.

We flew to Hanoi and wandered the winding streets in the Old Quarter, getting lost in the chaos.  We checked out the Hanoi Hilton where John McCain (and so many others) had been held prisoner of war.  And then… the most terrible stomach virus/food poisoning set in and I was out of commission for the rest of the night. Although we didn’t get as much time to sightsee here as we had hoped, here is a list of things to love about Hanoi!

After Toby made a trip to the pharmacy and managed to get me all of the antibiotics I needed, I was as ready as I could be to sit in a van for 4 hours to make our way to Ha Long Bay. From there we hopped on our junk boat for the remainder of the day and night.  Ha Long Bay was unbelievably beautiful, and peaceful, especially after being in Hanoi.  We spent one night there (you can spend two) and I think that was enough for us. Want a more indepth look at Ha Long Bay? Read on here.

After lunch on the boat we made the four-hour journey back to Hanoi and checked back into the hotel we had been staying in previously (many hotels are used to this so you can leave a bigger bag with them if you’d like).  We walked around Hoan Kiem Lake and then made our way to the beer corner in the Old Quarter for some 15 cent beers on child-sized chairs. At some point in your stay in Hanoi, I’d definitely recommend making your way there – cheap beer, street food and free entertainment!

After a crazy 10 days (more if you include our time in Tokyo) we were finally on our way to relax.  We took a two hour flight from Hanoi to Phu Quoc and had our butts in the ocean by lunchtime.

A lot of walking from the lounge chair, to the ocean, to the bar. By nighttime we were ready to check out the Dinh Canh Night Market which I highly recommend – especially if you’re a seafood lover!

We decided we should see a bit more of the island and rented a motorbike for the afternoon and made our way to the east side and Sao Beach.  After an adventure to get home we had a nice dinner and got some rest before our long journey home.

We flew from Phu Quoc back to Saigon in the morning and checked into a hotel for the day, until our flight at 11pm.  This time we had chosen a hotel near Pham Ngu Lao Street, famously known as Saigon’s backpacker area.  We spent the day getting our last tastes of Vietnamese food and beer before a quick shower and repack of our backpacks and then it was back to Tokyo… then Seoul… then finally Los Angeles.

For more detailed information on what we did, where we stayed and what we ate in Vietnam, check out the rest of our Vietnam posts:

Boats and Clothes in Hoi An